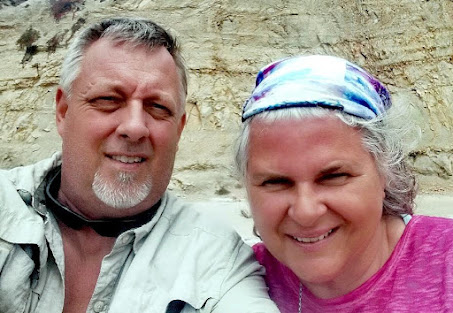 Scott and Janet at Drake's Bay in Marin County
When I read a post from our friends Maria Wulf and Jon Katz a few days ago asking for help in choosing a name for their new baby lamb, I thought it was a great idea, and then I didn't think much else about it.
After Scott died, I had a nudge. A quiet voice whispered how about asking Jon and Maria if they might consider naming the new baby lamb Scott.  I pushed the thought away a few times. It kept coming back. "Would Scott be okay with that?"  Softly I wondered.
He loved animals as much as I did.
Almost three years ago, when I first introduced him to my rescue pony and senior mare, we had to cross through a herd of fairly untamed Arabian horses to get to the field where my horses were kept. It was getting dark as I opened the first gate. I turned to Scott, "the Arabians are going to be excited and they might act up a bit. Just follow close behind me while I lead us to my pasture. They will probably come running up to you. As soon as they see you don't have food, they will leave you alone."
Scott followed me into the Arabian pasture. The two gray mares and red gelding flashed their tails and manes and headed towards us at a full speed gallop from the back of the pasture.  They ignored me and raced right up to Scott prancing and throwing their heads. I took a deep breath. Scott stood quietly, stretching out his hands towards them. I watched as all three horses immediately calmed down, and respectfully took turns breathing in Scott with their velvet muzzles. I watched as they touched his head, his face and than his hands. Then. All three horses circled him evenly spaced as he petted and talked to them the horses completely ignoring me -the well known horse feeder of the barn.
I called out to Scott laughing.  "The horses love you honey. I should have known you had a way with them."  I left Scott in the pasture with the herd as the moonlight guided my way to my horses in the next pasture.
So when Maria and Jon let me know that they would be happy to name their new baby lamb Scott to honor him after receiving my message.
I was really touched. In my heart, I asked Scott if it was okay that a lamb was named for him. Walking by the kitchen window, I looked out at the blue sky. Nearby a small white cloud formed into a baby lamb. I smiled and said thank you.
Jon Katz and Maria Wulf will be sharing photos and stories of their baby lamb named Scott. From the photos and stories, I am already following, I can see he is precious and I am looking forward to following his journey on their blogs at www.bedlamfarm.com and www.fullmoonfiberart.com
Each of their blogs are unique onto themselves, so if you are interested, I encourage you to bring some light into your life and follow both.
Thank you.

What a lovely photo of two happy people! I’m glad Jon and Maria named their lamb in
Scott’s honor. I think it’s a lovely tribute to have a namesake.

Thank you Cynthia. Me too:)

Thank you for writing/sharing Janet, so many people care about you and Scott and are holding you both in our hearts. What a lovely way to honor Scott's memory, thank you Jon and Maria <3