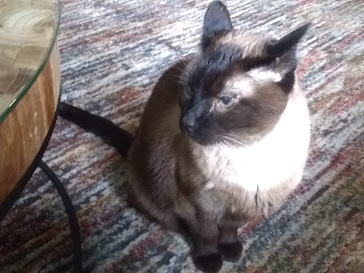 Our house sit kitty from Portland, Oregon
I watch as daily and evening rituals fade away slowly replaced by new ones. A new rhythm is settling. In the beginning, I would wake up at 1:30 am, then 3 a.m., then I would stir at 4:30 am. Now, I notice there is a routine emerging hovering around 5 a.m. consistently becoming more accurate.
Scott and I ate all our meals together except for breakfast. Now, I prepare and eat all of my meals alone. They are simpler, just enough to fill my stomach. For the first few days after Scott died, I didn't eat much, just enough not to get sick and weak. I watch as the meals become more consistent. Breakfast is formed, a light lunch and a small dinner. I see as the times are being formed as well. Snacking seems to have disappeared. I drink a lot more coffee, Scott isn't here to worry about it.
Yesterday morning, I was sitting in my familiar spot, looking out the windows to the trees. I've always sat in the same spot. When Scott was here, I always asked him if he wanted me to move my feet that were pointing towards the window looking out over the trees. In the beginning, he did. This last couple of weeks, he would say it's okay, and chose a chair near me so he could sit close while I wrote. I enjoyed that, having him close and lounging like Cleopatra at the same time.
I can't remember when it first started. I'm sure Scott invented it. Kissing sounds, just one or two. A soft sound letting each other know we loved each other. If I was in the kitchen, I would hear Scott send me one from the bedroom. I would make the kissing sound back. This went on and on through out the day if we were separated and especially if one of us might be feeling down and needed to know we were loved. If we bickered about something stupid, a few minutes later the kissing sound would start. One of us calling a truce, a reminder to let the petty shit go.
When Scott died, I watched myself walking through the house making kissing sounds. Sometimes one, than, two, than several. Reaching out to Scott, letting him know I loved him. I've been doing it since the day he died.
Yesterday morning, I was on the couch, my feet pointed to the window, my laptop open, always ready to write. I waited for dawn. The sun rose with a soft light. Outside the leaves on the trees fluttered. I heard a bird on the ground below, hopping. And then. The kissing sound. The bird started making a kissing sound, not just a bird sound, our kissing sound.
I listened, my heart filling with love, smiling as the bird kept kissing. I waited to get enough kisses. Then. I softly kissed back and watched the bird grow silent and fly away.
at November 25, 2020