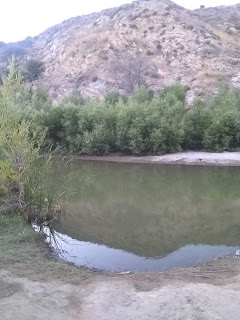 Canyon in Santa Barbara
Scott and I camped here for three nights before the fires came
I got bitten by a legion of spiders
I had swellings on my arms for weeks after
Several years ago I lived on another mountain in another area of Northern California. I lived with my horses, my goats and my dogs with a broken man. For months and years after, I was wounded. Wounded from losing my farm, wounded from losing another home on the mountain, wounded from losing a relationship I thought was a way out of my misery only to find, I fell into a deeper hole of misery.
Within days of leaving that mountain of misery, I started my pet sit business. My financial well being started to improve, with referrals and work from a new friend who owned a pet sit business, I was able to support my horses, goats, and dogs for the next several years.
The animals were taken care of. I was a mess. My energy was low. I had numerous health problems including fibromyalgia that caused almost constant pain.  The only time it really disappeared was when I was with my horses or caring for my clients' horses. Then, it would return.
One day, at my lowest, I was standing at line in Walgreens. I wasn't feeling well. I was spiritually disconnected, physically sick, and living in the past dwelling in all of my loss.
I felt alone. The world weighed heavy on my shoulders.
Waiting in line with several other customers, holding my small handful of personal care items, I turned around. An attractive Native American man smiled at me. I smiled back. We were about the same age. He was a few inches taller than me.
Turning back, I stared straight forward watching the checker in slow motion scan items for the next customer in line.
Behind me, I heard the good-looking Native American man in a strong voice say "you have hay in your hair".  I kept still. I could feel his hand touch my hair. And then the chanting and singing started. As he continued to sing, I could feel him gently removing the stray pieces of straw stuck to my hair. The line disappeared, the people disappeared. Walgreens disappeared. I lost my sense of self, my embarrassment of having a stranger touch me while chanting and singing, I surrendered to the moment feeling a connection of caring and love, I had not felt for a long time.
I looked up and saw the checker looking at me. I was next in line. The Native American man moved over to the counter opposite me with a bottle of soda in his hand. I checked out my items and left the store. As I unlocked my car, I looked up to see him crossing the sidewalk, and disappear into the apartments across from the highway where I was parked.
I knew he was a divine intervention, a healing had happened.
I was going to be okay, the Creator was looking out for me.
at November 30, 2020

What a wonderful story! It gave me goosebumps and my first thought was, what a kind man. I’ve attracted people like that all my life, they just start talking to me or come up to me out of the blue and give me something — a story, a smile, an object, whatever. I think it’s a gift.

Angels and Guides, thank goodness we have been so fortunate to have them help us on our path. Thank you for sharing Cynthia:)