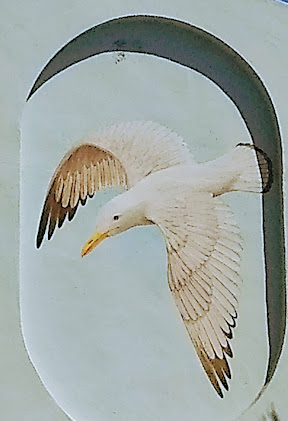 Seagull on building on our trip through
Santa Cruz, California
Any chance we got, Scott and I were in the car, later in the van driving along back roads. The destination was just a pin on the map. It was the road we traveled that was important. Going to the bank was never just going to the bank. Grocery shopping was tucked away as a small trip on a bigger adventure.
Scott loved the ocean especially a spot at Bodega Head in Sonoma County. Bodega Head is perched on a cliff overlooking the most amazing view of ocean I have ever seen. Each time you go, the picture completely changes.
Scott would drive up to the top of Bodega Head, park the car, and we would spend minutes to hours watching the waves, searching for otters and whales. Both of us would get irritated if people played their music loud, talked too loud, or blocked our view.
"What is more important than this". We would say to each other. "How can they play loud music and miss the sounds of the sea, the call of a seagull".  We would shake our heads looking at each other agreeing how much people were missing out. Missing out on the miracle right before us.
If people were overly obnoxious, the smoke from their cigarettes near our window, slamming doors, and talking loudly while we tried to relax in nature, Scott would turn on the car and move to another spot.
One day, we hiked Bodega Head before leaving on an out of town trip. This time Scott drove up into the hills towards a trail head. We got out, locked the car, and followed the trail around another side of the area. Scott walked in front of me. I followed. That day, the weather was perfect in the seventies, the ocean was an ink blue, we could hear the seals barking in the distance. Diamonds of light sparkled across the gentle surf. In the distance, Scott pointed out a whale blowing spray and than I spotted a pod of dolphins swimming by. Hawks floated and glided above us, one almost touching our heads.
It was so quiet. It was like we had entered a fairy tale of beauty and awe created just for us.
Another time, Scott drove us to Point Reyes. He was heading to the lighthouse but made a wrong turn. Instead of being frustrated, Scott followed an unfamiliar road which soon revealed a huge herd of Tule Elk taking naps overlooking a bluff with the most incredible view of the sea. On the grasslands, we spotted the male with a huge rack lying down guarding his harem. We looked at each other taken aback at how amazing and powerful he was.
Later, we passed a ranger truck.  Scott pulled over, got out and greeted the ranger. Scott never missed a beat when it came to starting a conversation with a stranger. I always hung back not wanting to put in the effort. I stood behind as the two talked. The ranger was excited, an important event had just happened. The stunning Tule Elk male we had just seen had just battled it out with the other Tule Elk male pushing him out to claim a new territory.
Through out the rest of the trip and many times over coffee later we would remind each other how thrilling it was to discover the new area the King had conquered just by taking a "wrong" turn.
Saying to each other over and over, that he had picked the best view in Point Reyes to look out over the vast ocean.
at November 21, 2020