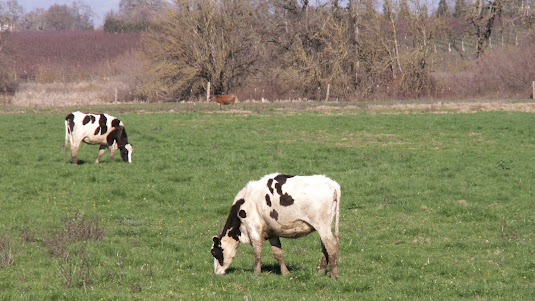 Holstein Dairy Cows
Sebastopol, California
My first outing with my new camera was a tad bit ambitious. Half way to the laguna, I realized I forgot to bring the park pass. So we ended up going to the city park following a muddy trail that I hoped would lead over a bridge to the wetlands. The trail did not cross the water, it dead ended into it 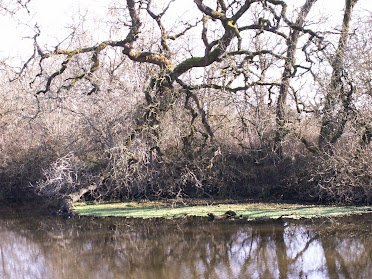 Dead End: Wrong side of the Laguna
I consider the jaunt around the city park trail surrounded by winter green pastures speckled with black and white cows, and homeless encampments dug into the mud semi hidden behind brush a success. I turned my camera on, pushed buttons, practiced the zoom, and what really mattered in the big picture of things is, it got me outside and out of my sadness. That is huge.
Truly a successful excursion.
I did try to take photos of the bright banana yellow goldfinches while they tweeted away high up in the barren trees. As soon as I almost had a good opportunity to take the photo, someone would walk by with a loose dog, or a pack of teenagers mask less would rumble by. The birds tried to be cooperative by flying back and forth between the trees, but no luck this time. It was beautiful to hear them chatter. A couple of hawks circled above and a vulture made a quick appearance. Too far up in the sky for the zoom.
I ordered a couple of memory cards for the camera. And two Northern California field guides, one for wild birds, the other for identifying wild plants. It would be nice to have one for Fungi/Mushrooms too.
It feels so good to get lost in nature again.
at January 14, 2021

The cows are so adorable. Nice shot of them grazing!

Great that you went for a walk. Skill with the camera will be an evolving thing.

Thank you David! Yes, I am excited about it. I can't wait to do some serious bird watching. It's been awhile.