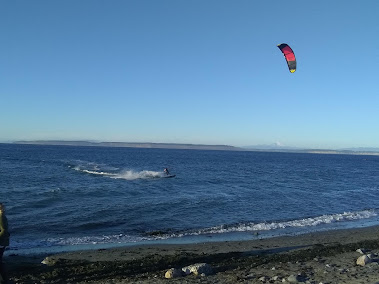 Watching a Kite Surfer on Port Townsend, Washington
Scott and Me
I like to write letters. Yesterday, I wrote an email to a Canadian gentleman who owns a Victorian Resort in a cove by the sea in Mendocino. I stayed there with Scott twice last year. The first time, we stayed for two nights in a small nest of a room near the cozy restaurant overlooking the sea. Every day, we hiked above the bluff to the small town, at the deli, we purchased sandwiches, drinks and snacks to take to the beach for a picnic.
The first night, we arrived at the Inn by the Sea, at check in we found out the special dinner, a French chef was preparing for that evening's Valentines was sold out. The owner of the Inn, a Canadian of Indian ethnicity saw the look of disappointment on our faces. Graciously, he offered to cook us a homemade Indian meal and serve it to us in the upstairs living room, in a nook overlooking the Pacific Ocean at sunset. When it was time, Scott and I walked up the small winding staircase, finding a couch facing the view, we sat next to each other waiting for our dinner. Soon, the owner carried a tray of Indian delicacies, perfectly cooked rice, a curry, vegetables and a dessert. As the sun set in, we watched the slow moving show of spectacular pinks, lavenders, and the deepest blues color the sky, we shared dinner as the birds flew home before dark fell and the stars appeared in the night sky. Both of us saying to each other, how we were so lucky to have a homemade meal and how much better it was than eating the fancier one in the dining room downstairs.
The second time we stayed at the Inn by the Sea, it was Scott's idea. He asked me if I wanted to go visit the cove and say Hi to the owner, walk the beach, and the garden of flowers. When we arrived, we stepped into the restaurant, it was almost noon, the sun was kissing the sand as the waves lapped gently on the black rocks below. The sea reminded me of Hawaii, teal blue, calm and inviting. The chef greeted us from the kitchen and offered to pour us a glass of wine. He invited us to sit and enjoy the view and as we looked out at the ocean from the windows of the restaurant, he described the evening menu in detail. Scott asked me if I wanted to stay the night. I whispered to him, that I thought it was going to be extremely expensive, the dinner, the overnight stay, the wine. What about our budget?  Scott looked at me and said, "just book it, don't worry about how much it costs."
So I did. It was way out of our budget and expensive. And so worth it.
Yesterday, in my letter to the owner of the Inn by the Sea, I described how wonderful our two visits were to his place. How much we loved staying there. I reminded him of the home cooked dinner he served us. How appreciative we both were of his generosity, the hospitality of his chef and staff. Then. I let him know that Scott had passed away. In my writing, I told him that his Inn was magical for us. That we were not married, but hoped to be some day and that I would always remember his Inn by the Sea, our stay there as our honeymoon.
The owner wrote back to let me know that he had met hundreds of guests over the years at his Inn and most he cannot remember, however, he did remember us, that we stood out among many and he invited me to come stay at the Inn by the Sea, that he understood loss and the sorrow that never leaves you, how the pain comes and goes over time, that Scott will always be with me, and Scott would not want me to be sad. So come, come stay at the Inn by the Sea with us, it is safe here.
at January 07, 2021

I love this story so much. The landscape, the connections, the love. Beautiful honeymoon!

You have so many beautiful memories of your time and travels together. Thank you for sharing this one. And I do hope in the future you can take the owner up on his kind offer and enjoy the memories in person again.
Peace & Light to you.